A fresh look at Depth of Field 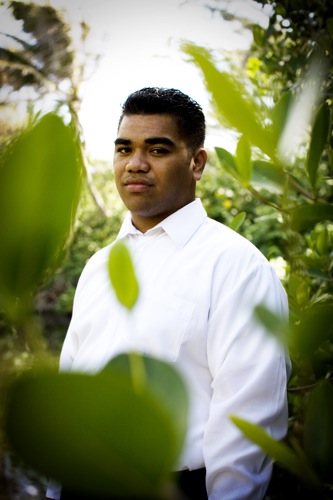 We talk a lot around here at Digital Photography School about Depth of Field. I’m writing this based on the assumption that we all understand that in layman terms, “depth of field” is the portion of an image that is in sharp focus. To illustrate: in landscape photography, generally you’re working to achieve a very large depth of field. You want EVERYTHING in the scene to be in sharp focus. With portraits, photographers are often shooting for (lame pun intended) a more shallow depth of field, focusing in on their subjects and working towards fall off or blur in the background. Why do you think this is the case? Clearly to draw focus to the story being told. Well what if you want to tell a different story OR what if you want to tell the same story in a different way? Today let’s talk about depth of field and some ways you can use foreground in a different way to draw a different kind of attention to the story you’re trying to tell. Here are 3 ways to create “story telling images” using foreground to achieve creative depth of field.

I wanted to find the most straight forward illustration I could to get the point across clearly. This shot (left) is from a recent senior portrait session. I wanted to draw attention to the senior, particularly I wanted him to seem strong and capable: READY to take on the world.

How to get a shot like this: well I was shooting with a 50mm lens. I got right up close to the foliage that separated Melvin and I. First I tried with auto focus, but because of my proximity to the leaves, I had to switch over and focus manually. 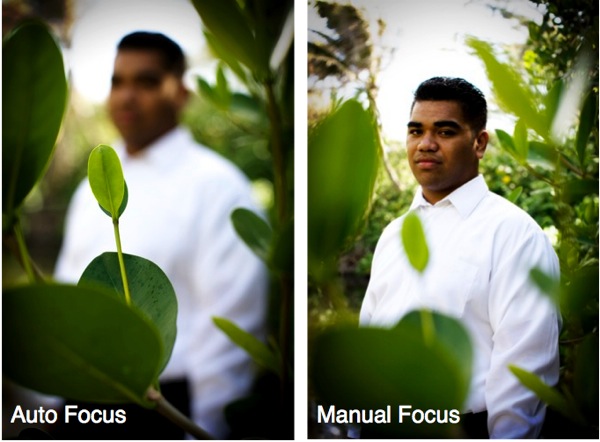 2. Don’t be afraid to throw your subject out of focus:

When you’re doing portraiture, you’re generally trying to establish some kind of mood through imagery: happy, solemn, lovesick, sexy. . . Generally the mood is created through posing etc. For the next shots I let the foreground tell a few different kinds of love stories for me.

Back in March, I was shooting on Balboa Island in California. We were out on this dock shooting the typical, fun, happy, “we can’t wait to get married” stuff and I was getting bored. I had them take their shoes off and put their feet in the water. Better, but still pretty typical. So I waded out into the water, hitched my skirt up around my waist, nearly dropped my camera into the ocean, and created these. First I focused on the couple and threw the water out of focus. It’s a nice shot. It looks like they’re sitting on the dock watching the sun set. Nice. Then I focused on the water throwing my subject out of focus. A little sexier huh? Like, we’re sneaking up on some steamy make-out sesh. . . ha ha! But really, both images are good, while neither image is going up for any awards any time soon, they’re both good images. The second just speaks to you a little differently, tells their sexy love story a little more clearly. 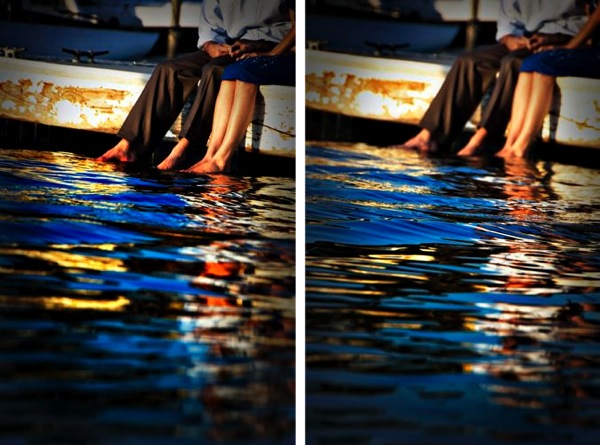 Here’s another image where I decided NOT to focus on my subject, again to tell his story better. Back to Melvin’s senior session. Here he is walking into his future. I wanted to show where he was going, but also to illustrate that he’s on his way there because of where he’s been. . . I think this image is a powerful one that illustrates hope for the future and grounding in the past.